We snake across the side of the mountain into a pasture of 10.000 orchids. “This is where the world’s silence is made,” Julien observes as we approach the wonderful mountain-cabin. The pasture is a natural small amphitheater in the sky, offering a dazzling view across the Soča valley below. Klemen points out PIFcamp somewhere in the distant depths among the few houses along the river. Generations of sheep have observed the world from here. The cheese must have been amazing.

PIF means “geek” and even more than building interesting tools, sounds, experiences, PIFcamp builds community, and therefore hope in turbulent times. River Soča and its valley draw all kinds of beings into its beauty and clarity. It has drawn us geeks in too. Some grew up here, some have been back many times, some will dive-into it’s crystalline waters for the first time. From the flute playing people of the old knowledge thousands of years ago, to the synthesizer building geeks exploring knowledge in newly emerging forms. The valley is a giant loom weaving all these threads and communities into complex patterns. PIFcamp honours the wisdom of river, music, light, sensors, resistors, lichens, potatoes, and people of all ages. And now fire. The recent forest fires call upon people to rediscover the wisdom of fire as eye-whitnessed by Marko. Once the smoke cleared, he emerged from the confusion of an improvised command center driving home in a wrecked car, with doors and windows missing. (ePIFany is this years theme for PIFcamp…)

The extreme droughts hitting Europe make Soča river seem an even bigger miracle. I’m told its lower than usual, but this area is still green unlike much of central Germany I passed on the train. Rain still falls here and the flowering of wild carrot and other species seems totally in synch with my garden 900km north-west, which may suggest relatively cool conditions. Long ago the Alps harboured cryptic refugia from which many species could spread again after the last change of climate; the plants, animals and people spread North into a barren landscape left by the retreating giant icecap of the last ice age. Perhaps we could learn something from those people, living through the previous big change of climate. Perhaps these mountain pastures will again offer refuge to some in the current climatic turmoil? The first days I mainly sit by the crystalline water and listen. After a few hours the sound starts to wash through you. I decide to fast (limit eating) to see if it makes me even more receptive to the river. Water leads this workshop.

The patterns being woven by organisms in this valley used to be described by science along Linnaean taxonomies. We are rediscovering them as kinship networks: the patterns which arise from the interdependance of animals, plants, people, natural cycles and geological processes. A view of the world less like an excel sheet, more like a symphony being created in real time. This valley is a community improvising and co-creating like we geeks do in our night-time live-coding parties. During mountain walks I’m trying to see the communities beyond the taxa, and I try to see beyond what is there, to also become attuned to what is missing. A gap may be much easier to spot in a symphony than a list of taxa. It is a great advantage of indigenous knowledge systems, to see which 'force of influence' from an animal or plant species is absent in a landscape. To see where an ecosystem lacks full expression. Looking at Soča river I’m guessing beaver. The scale of the forest fires perhaps indicates a lack of large herbivores that would fragment the forest into smaller patches. Its hard to say. I've only been here three days and this is pretty much the bleeding edge of ecological science atm. In the rainforest I get a sense of it from friends from indigenous backgrounds. Here Klemen emerges as a central guide with his extensive knowledge of traditional regional foods. Cheeses and soups become portals leading back in time. 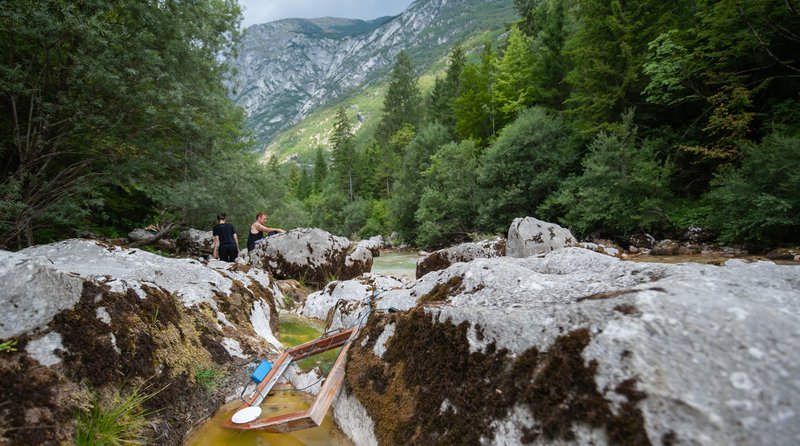 In the train back to Amsterdam I read how Tyson Yunkaporta explores his indigenous roots. He describes it as a process of undomestication from late-capitalism through becoming more related to land and community. In that ancient context understanding is more than comprehension. Understanding becomes also responsibility. For a moment, Tyson’s words make me see PIFcamp in a different light, as a community engaged in ongoing processes of undomestication from overbearing systems and societal dogma and finding different forms of responsibility (also as response-ability). The ability to respond and improvise even when systems come crashing down. And the feeling that it is important to do so.

Seeing the river and the valley trigger me to draw some of the most inspiring organisms that have come to inhabit the gardens that form my outdoor studio. Over 7 years I've been observing them, the qualities these plants and animals have and the totemic lessons they have taught me. Plants and animals have been highly esteemed guides since forever. All these different kinds of intelligences used to inform us. We need their guidance now more than ever. This (unfinished) sketch includes: Willow, Heron, Toad, Chafer, Ant, Ergot, Magpie, Grasshopper and Human. The process of drawing may open up new insights into the nature of these beings and will draw me closer to them. Probably the next step is to make individual cards for each. But for now this is where I m at..

text and drawing by Theun