the town
The 13th and 14th of November 2015 the first FieldRobotics workshop was held in Falmouth, in Cornwall in collaboration with FoAM Kernow. Falmouth is a very unusual place. Despite its relatively small size the small town hosts a large university population. This gives the town a very attractive cosmopolitan atmosphere. FoAM Kernow has opened its studio there recently and has since developed a diverse and transdisciplinary program. Our workshop has extended its reach beyond the local community of creative practitioners, students and researchers to Bath, London and beyond. The town is particularly suited to start our workhop program, due to its varied and dynamic landscape, ranging from farmland to estuary, industry and domestic areas, but also because of its academic range from art and design to behavioural ecology and anthropology.

the goal
The aim of this first workshop was to have a large and diverse group of participants work in parallel teams on the design of an artificial creature or in Cornish jynnweythek godhviles (mechanical wild animals) for a specific place in the Falmouth area. This enabled us to explore many different approaches for a diversity of viewpoints. The knowledge and insights gained will feed into the workshops in spring next year. 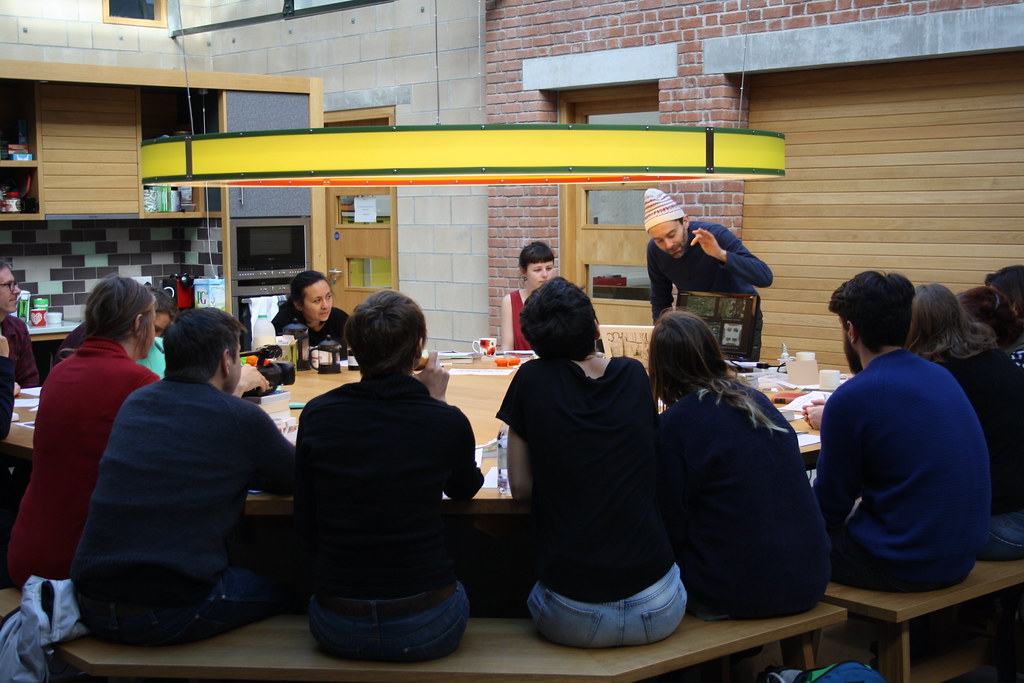 the introduction
We started the day by going out along the estuary and assembling into a large circle in an old graveyard looking over the water. Participants introduced themselves with a picture or a description of a place they feel close to or grew up at. So the landscape was the point of departure at all levels. About half an hour was used to connect to the environment on an emotional and physical level. From breathing we connected to the atmosphere, from our feet we connected to the Earth’s crust. From the sound-scape we connected to layers of history and from observation we tried to take the viewpoint of non-human inhabitants.

the exploration
Teams of six went out and spent the morning exploring the area across from Jubilee Wharf basking in sunlight. Participants looked for spaces, niches or microclimates where the landscape suggests a robotic inhabitant. Everyone was encouraged to also work by themselves if needed. This was allowed to happen organically. Theun’s team moved up from the graveyard and passed through narrow Cornish footpaths going places even our local team members had never been. After a while it became a muddy trail down a footpath drowned by a little creek that flows all the way down into a soggy reed-bed along the coast. We stopped to take in smells, tried to determine plants species, explored textures, colours and the shifting spaces within the reed-beds. Sitting in a field we exchanged impressions for an hour or so before heading back to an amazing lunch of prizewinning bread and delicious salads.

the design
At the ZedShed, a space next to FoAM Kernow’s office, the four teams gathered to start exploring the initial ideas that emerged in the outdoor exploration. Guided by fieldnotes and a series of themes for thinking about various aspects of wilderness machines, including: ecosystem role, lifespan, behavior or reproduction, each team brought their creature more into focus. The design session aimed towards a first basic sketch and description of a creature or entity that could be presented to the other teams. Each team collected their materials and the day ended with four portraits of jynnweythek godhviles, hybrid creatures sprouting almost like mythical beasts from Cornwall’s techno-ecological landscape.

the engineering
As the participants gathered with coffee and tea in the morning they were treated to a detailed presentation by Ivan Henriques about his work building advanced plant-robotic systems and symbiotic machines. This brought into focus the many technical challenges that are part of creating such custom made hybrid entities and led to interesting questions about imagining bodily functions that may be very distant from human experience. To show the other end of the engineering spectrum Theun showed some Youtube clips of the Japanese phenomenon of Hebocon, which are robotic sumo tournaments for the ‘technically ungifted’ where ‘crappy robots’ with swinging plastic arms on wobbling boxes take each other on in hilarious duels. This put any nerves of participants about our technical skill-levels to rest as teams gathered for a day of prototyping. Intermingling and collaboration on all levels extended the exchange of ideas and matching skills.

the prototype
Teams worked for an hour ripping apart robotic toys, skinning mechanical hamsters, glueing electronics to vegetables and harnessing electricity from mud. In this mayhem, mechanical organs were sketched, bodies took shape only to dissolve again and biographies of unknown hybrid species were pencilled into notebooks. Whatever resulted from this surge of assembling and connecting was presented by teams in short updates, bringing out unsolved challenges to the whole group and allowing solutions to surface from all sides. In practice it helped teams to get to grips with their projects and get a clearer picture of what they are constructing. The last hour of prototyping progressed, before the creatures were introduced to their outside habitats. Suddenly various parts were connected and improvised bodies and systems materialized. 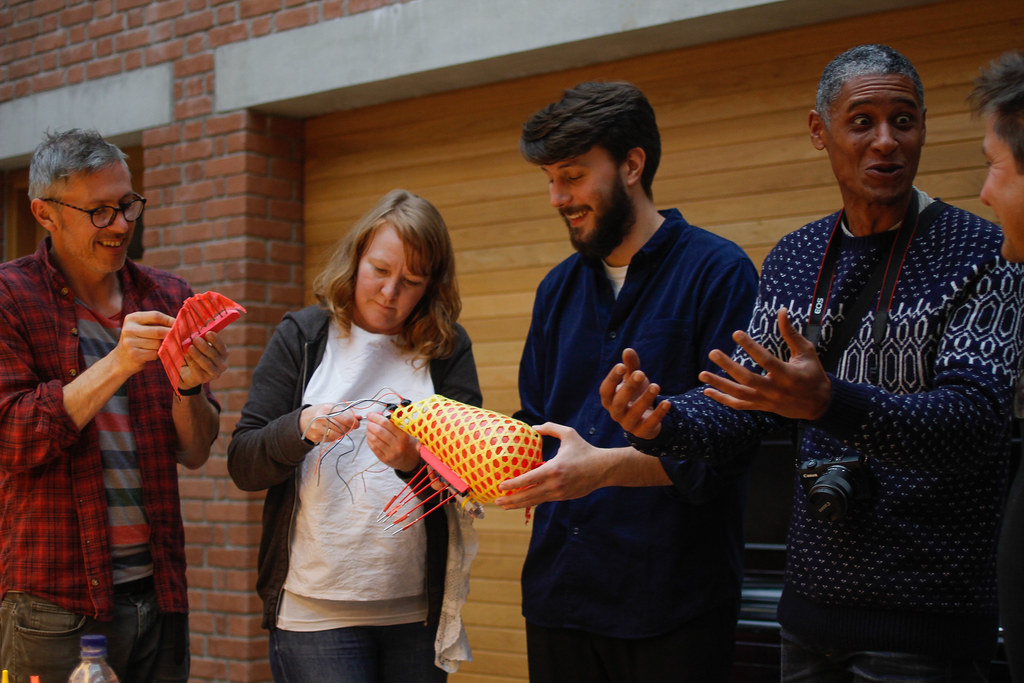 the plunge
The weather wasn’t perfect but everyone was eager to get outside and see their creature being introduced to the environment. In the rain we went for the first opportunities available: the harbour at Jubilee Wharf. It was reminiscent of the festive christening of ships that are freed from their docks. Each team let their creature go free. The extended machine created by Amber’s team whose metabolism was integrated with plastic waste was set free in the harbour first. While it gently floated across the surface, the bubble blowing entity made by Judith’s team and the cuttlefish-machine from Ivan’s group also took a cautious plunge. They are cheered on and pictures were taken. Theun’s team let their stringy being roam free at the side of the road. Its colours clashed somewhat with the neatly kept municipality shrubs, but a poem helped bringing the creature into context.

the feedback
Participants gathered for a closing round of impressions, comments and suggestions which will help refine the next workshops in the project. A massive clean-up effort brought the space back to it’s original state. Theun took the sketches back home to make them into detailed drawings (like botanical illustrations).

"I can't remember a time when I was so connected to an environment; looking from the perspective of the organisms and processes that exist there"

"I really enjoyed the way we could first be in the landscape and then work from that. The collaboration of arts and sciences creates a flow of ideas"

"It's rewarding to work with artists whose imagination is not constrained by function, but based on a vision, even if it seems unrealistic from a scientist's perspective"

"I see that in the workshop we weren't going to solve any issues, but it can inspire people to solve issues"

"Robotics is usually a very strict discipline in my normal practice, done in a very well defined setting and controlled lab environment. In a lab anything soon seems to make sense. Here we went into a totally open environment. Outside is wild"

"Starting from not aiming for any specific function is challenging for the mind, but it really forces new approaches"

"I enjoyed the feeling of exploring the future by hand"

"Everything is like a whirlwind, but I feel alive" 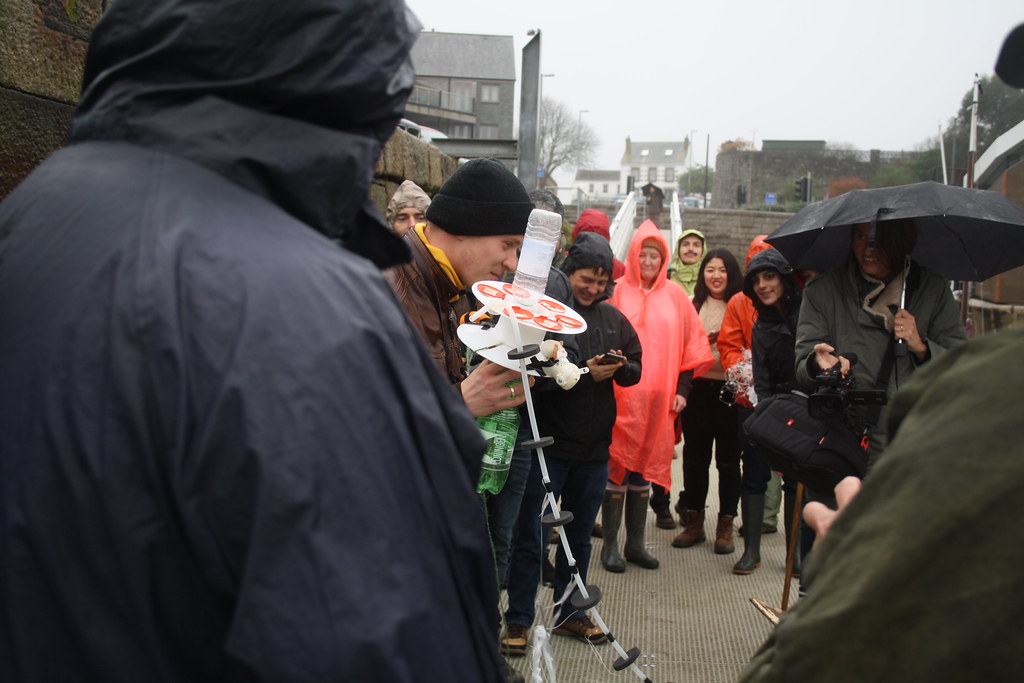 This workshop was funded by the FEAST programme (Arts Council England in partnership with Cornwall Council), Creative Skills Cornwall, and the Stimuleringsfonds Creatieve Industrie (Crossovers). The workshop was an invited contributor to ArtCOP21 - a global festival of cultural activity on climate change.